LOS ANGELES (July 19) – Though Brian Burke told Sportsnet-590 a couple of weeks ago he had tepid interest in acquiring another young goalie, there is likely no practical option for the Leafs general manager. The net-minding landscape in the National Hockey League is not unlike the parched lawns in drought-ridden Toronto: mostly barren and desolate. Burke was, and still may be, hoping to obtain an established puck-stopper, but the odds are decidedly mounted against him. Such commodities rarely become available on the trade or open markets.

Roberto Luongo is unlikely to be in play until the eve of the 2012-13 season, when pressure will mount on Vancouver GM Mike Gillis to solve his goaltending entanglement. Even then, the no-movement clause in Luongo’s contract will dictate – to some degree – where he eventually lands.

Jaroslav Halak has come up in trade speculation involving St. Louis, though it’s difficult to comprehend why Doug Armstrong, at this juncture, would seek to move him. Brian Elliott had a terrific record (23-10-4, 1.56 GAA) in 38 games last season and stepped up for an injured Halak in the opening round of the playoffs against San Jose. But, Elliott wasn’t nearly as effective against Los Angeles in the Western Conference semifinal – a four-game sweep by the eventual Cup champions. Conventional wisdom would therefore have Armstrong retaining both of his netminders to begin next season, whenever that may occur.

As such, Jonathan Bernier represents a viable; somewhat tantalizing and perhaps lone alternative for the Maple Leafs. Drafted 11th overall by Los Angeles in 2006, Bernier wasn’t able to answer the Kings prolonged quest for stability between the pipes and his early professional years were spent with Manchester of the AHL. He was the second goalie named Jonathan to be drafted by the Kings in consecutive years – Jonathan Quick having come aboard, 72nd overall, in 2005. Beginning in the 2009-10 season, Quick rapidly overhauled Bernier and has since compiled a 109-67-23 regular-season record here in L.A.; earned a Vezina Trophy nomination; a Conn Smythe Trophy; a Stanley Cup title, and a ten-year contract extension from the new champions.

Barring injury, the original Jonathan will continue to play 70 games a season for Darryl Sutter, prompting the 2006 version to seek a change of address. Toronto could well be his new home. With only 48 games NHL experience, Bernier is a practical unknown, but that should not inevitably consign him to the goaltending scrap-heap. In fact, there are equal parts to such a designation – one of which conveys unfulfilled promise. He would hardly be the first of his kind to gain traction upon release by an original club; at the risk of a wildly premature correlation, a fellow named Dominik Hasek began to flourish only after Chicago traded him to Buffalo in 1992. On the flip-side, Bernier would not initially be expected to solve the Leafs prime deficit: a constant, reliable presence in goal that dates to Ed Belfour in the pre-lockout campaign of 2003-04. He may, in fact, prove to be of no greater quality than the Leafs already own, with James Reimer hopeful of rebounding from an injury-plagued season and Ben Scrivens on the cusp, perhaps, of big-league deployment after back-stopping Toronto Marlies to the AHL Calder Cup final.

What Bernier would do is ramp up competition for the starting role and provide Leafs the potential of a first-round draft choice – soon to be 24 years of age – at a position that often requires extra development time. A one-for-one exchange involving Nikolai Kulemin would be more than fair to both sides, though the Kings are reportedly (and justifiably) intrigued by the promise of young winger Matt Frattin.

Either way, it’s a deal that would hardly destroy anything the Leafs are hoping to accomplish down the line… and one that might pay off handsomely.

It was a beautiful night for baseball here in Los Angeles on Tuesday, as the Dodgers hosted Philadelphia in the second of a three-game series. Former Blue Jay Roy Halladay started for the Phillies after a seven-week injury absence dating to May 27. He went five innings; gave up two earned runs, and left trailing, 2-1. Philadelphia rallied in the ninth inning to win the game, 3-2.

I had my trusty Nikon with me at Dodger Stadium: 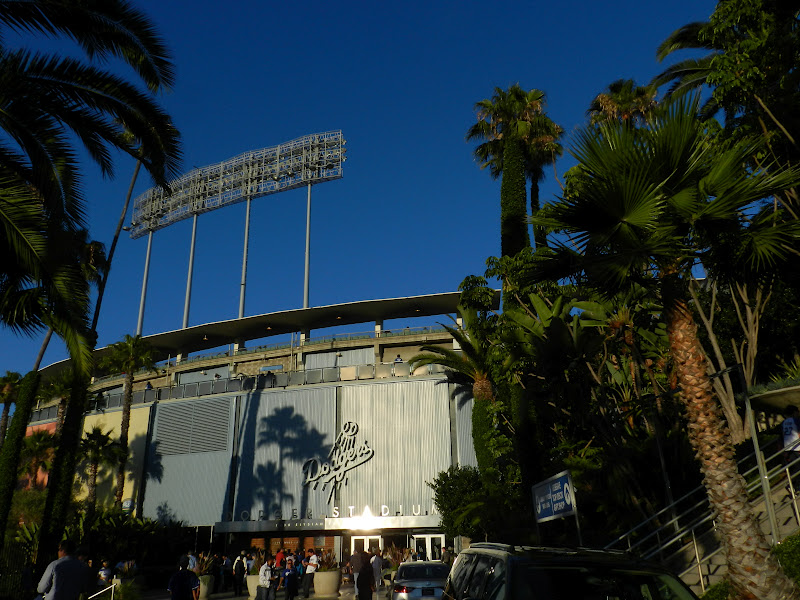 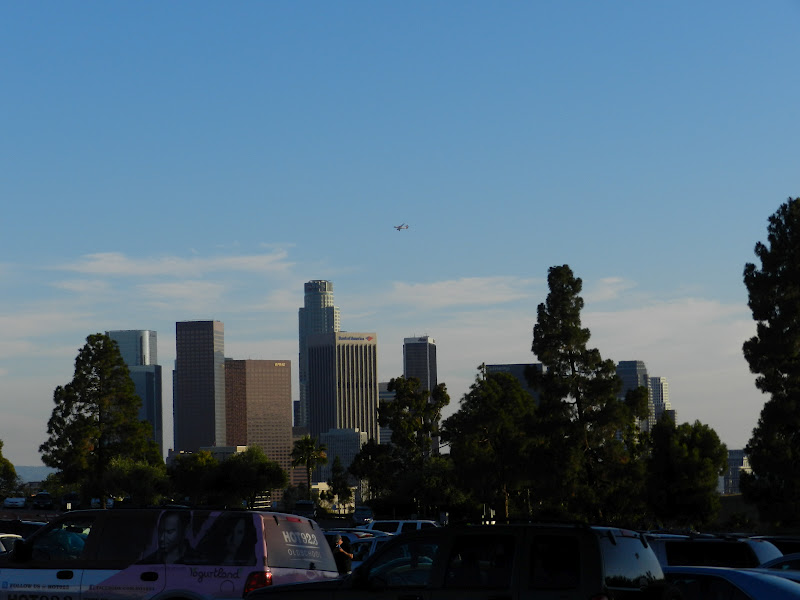 FROM STADIUM PARKING LOT (ABOVE): A JETLINER SOARS OVER DOWNTOWN BEFORE TURNING RIGHT FOR FINAL APPROACH TO LOS ANGELES INTERNATIONAL AIRPORT. 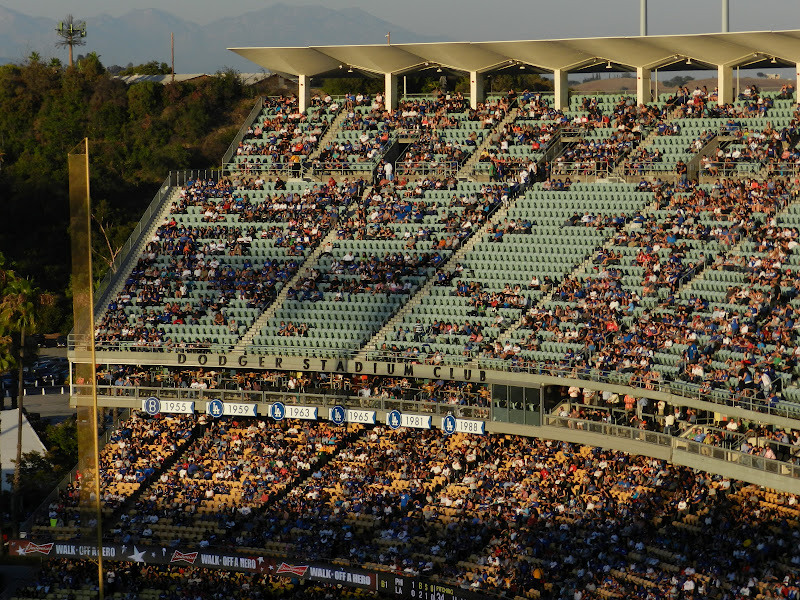 SEATS ON THE FIRST-BASE/RIGHT-FIELD SIDE OF DODGER STADIUM (ABOVE) WOULD SOON BE OCCUPIED AS THE CROWD SWELLED TO 53,498 FOR THE BALLGAME. 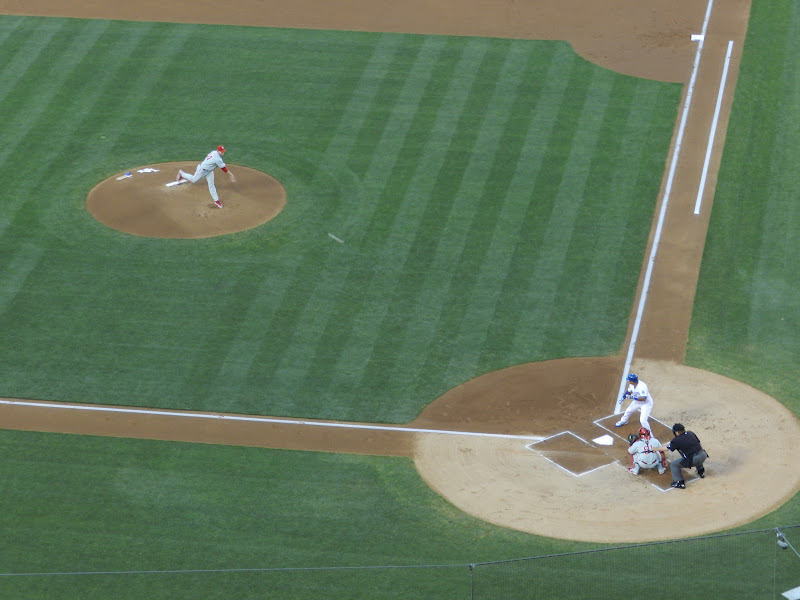 FROM OUR SEATS IN THE TOP DECK (ABOVE): ROY HALLADAY DELIVERS HIS FIRST PITCH TO LEAD-OFF HITTER BOBBY ABREU, THE DODGERS’ LEFT-FIELDER. 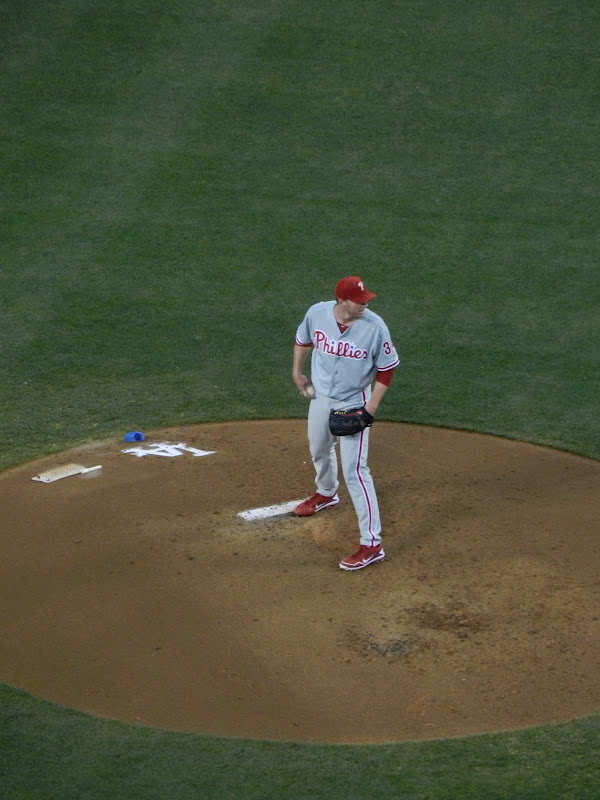 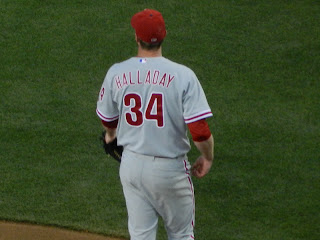 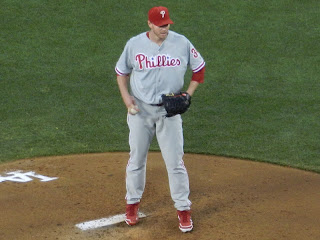 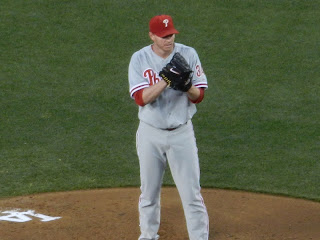 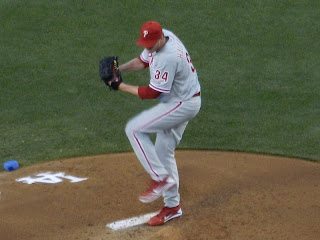 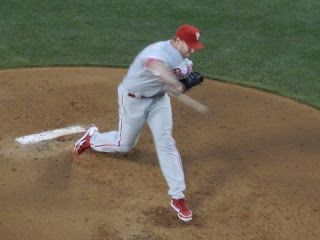 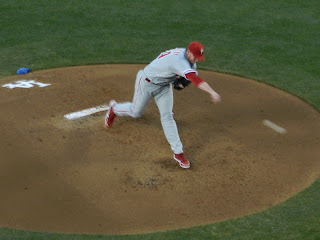 HALLADAY’S PITCHING SEQUENCE (ABOVE) LED TO A ONE-TWO-THREE FIRST INNING AND A STROLL BACK TO THE VISITORS’ DUG-OUT (BELOW) ON THE FIRST-BASE SIDE. 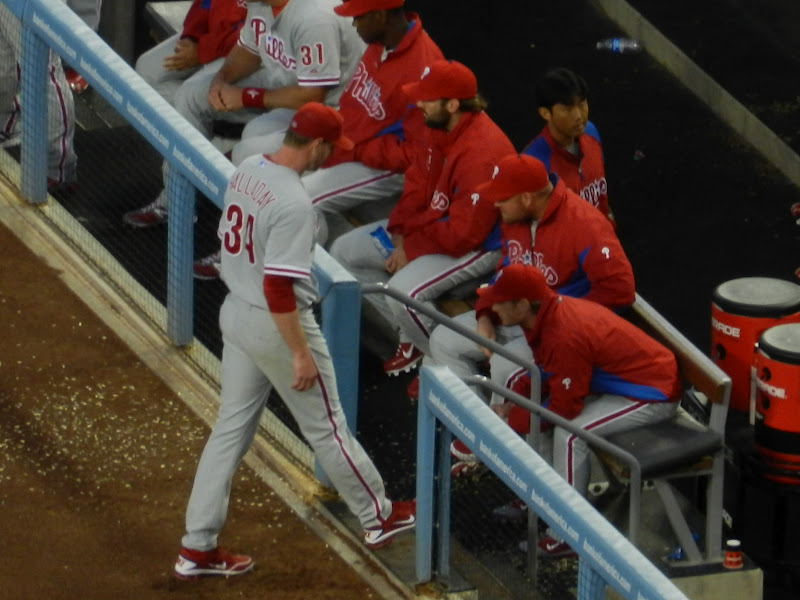 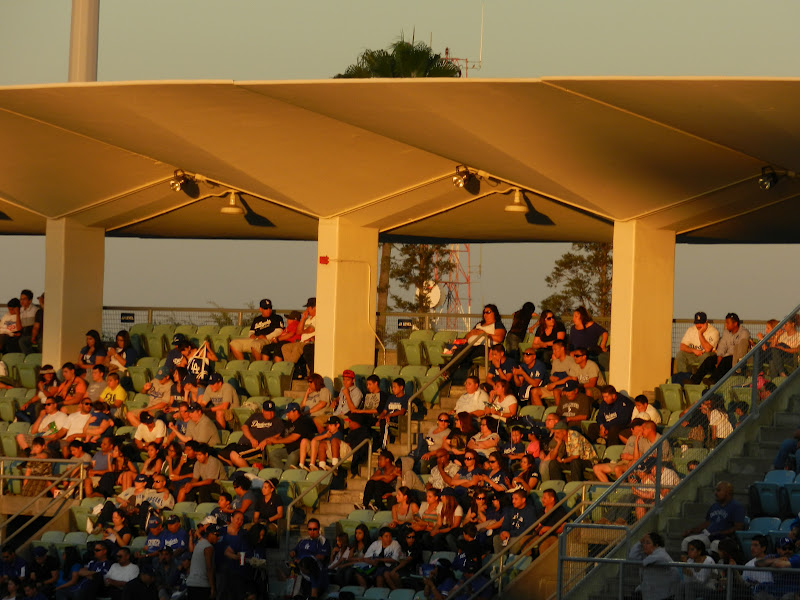 SETTING SUN CASTS A DEEP GLOW ON THE UPPER-TIER OF DODGER STADIUM. 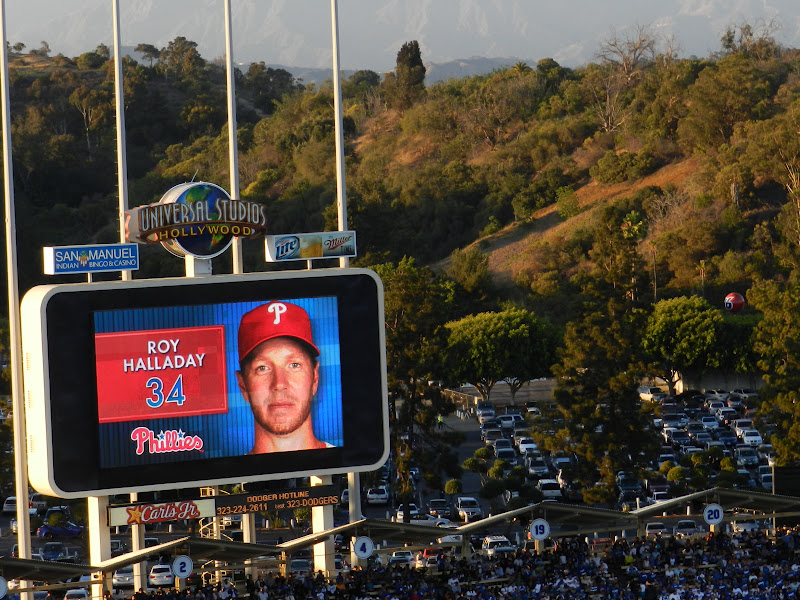 VIDEO-BOARD ABOVE THE LEFT-FIELD PAVILION SIGNIFIES SECOND-INNING AT-BAT FOR HALLADAY, WITH STADIUM PARKING LOT AND HILLS OF CHAVEZ RAVINE IN BACKGROUND. 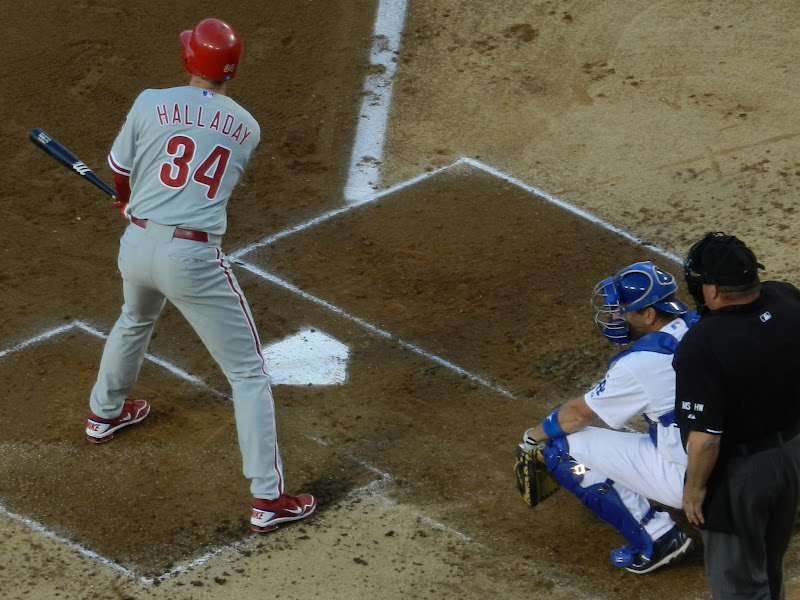 IN HIS ONLY PLATE APPEARANCE (ABOVE), HALLADAY GROUNDED OUT AGAINST STEPHEN FIFE, WHO MADE HIS MAJOR LEAGUE DEBUT SUBBING FOR INJURED CHAD BILLINGSLEY. 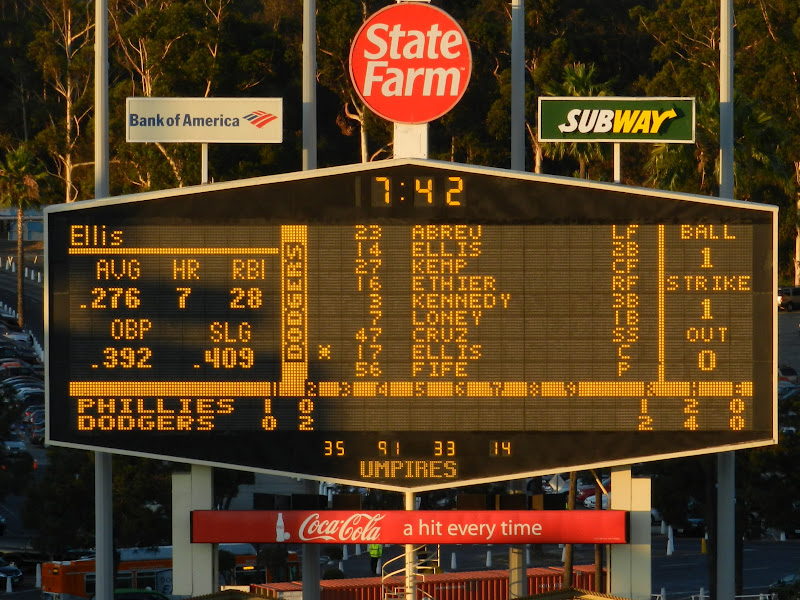 DODGERS SCORED BOTH THEIR RUNS OFF HALLADAY IN BOTTOM OF THE SECOND INNING. 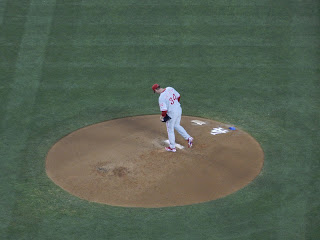 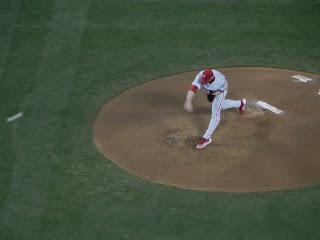 HALLADAY DELIVERING (ABOVE) FROM FIRST-BASE SIDE IN THE THIRD INNING. 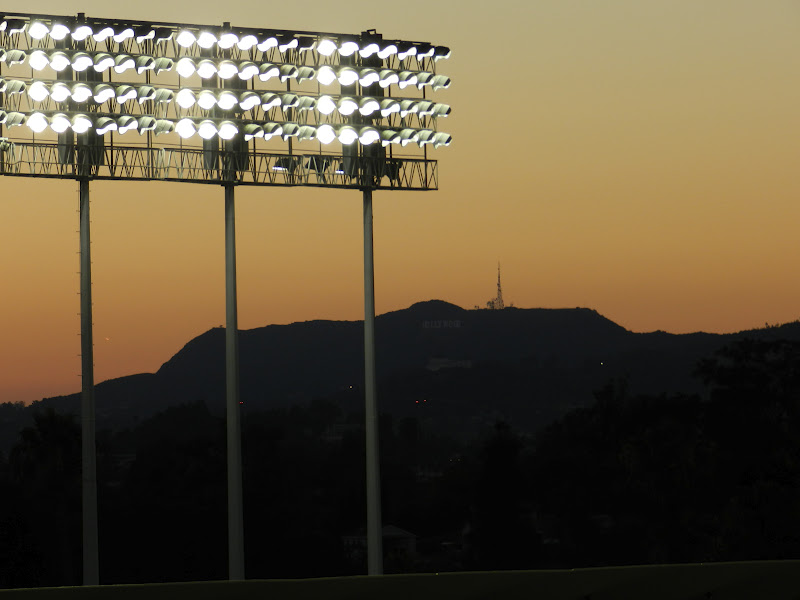 AT DUSK (ABOVE): LOOKING BEYOND THE THIRD-BASE/LEFT-FIELD STANDS AT DODGER STADIUM TOWARD THE HOLLYWOOD HILLS AND THE FAMOUS LETTERS (BELOW). 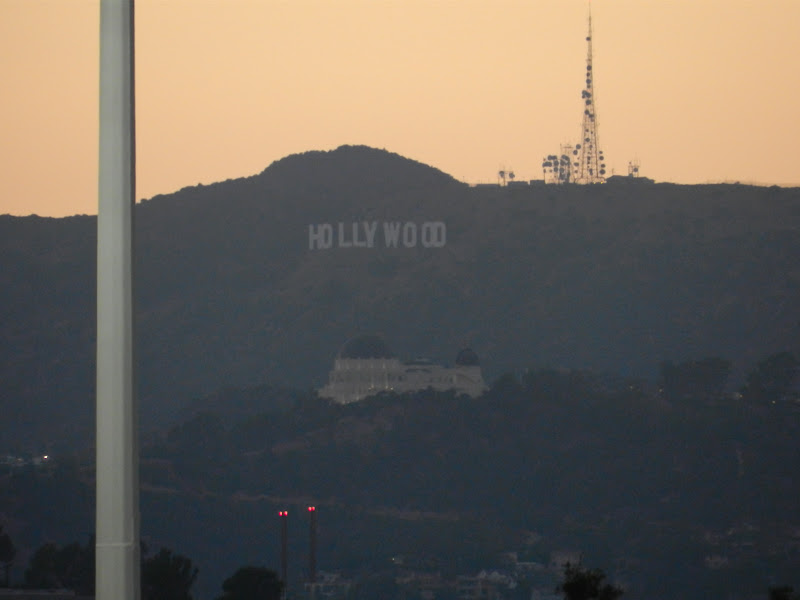 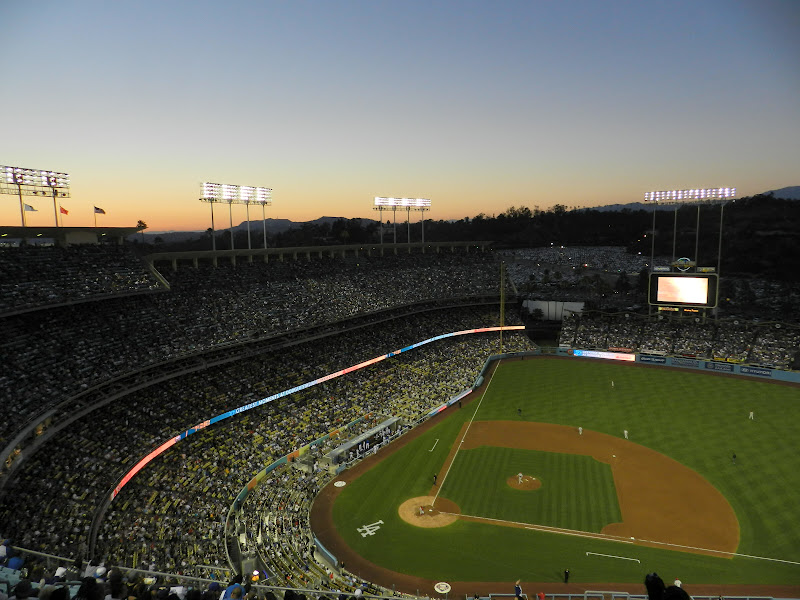 VIEW (ABOVE) FROM HIGHEST POINT IN DODGER STADIUM – LAST ROW OF THE TOP DECK. 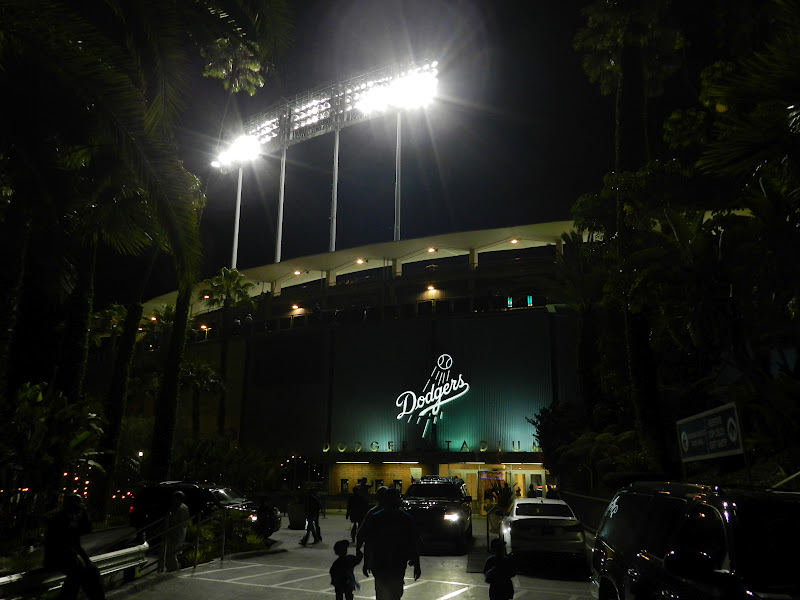 LEAVING THE 50-YEAR-OLD BALLPARK AFTER THE GAME. 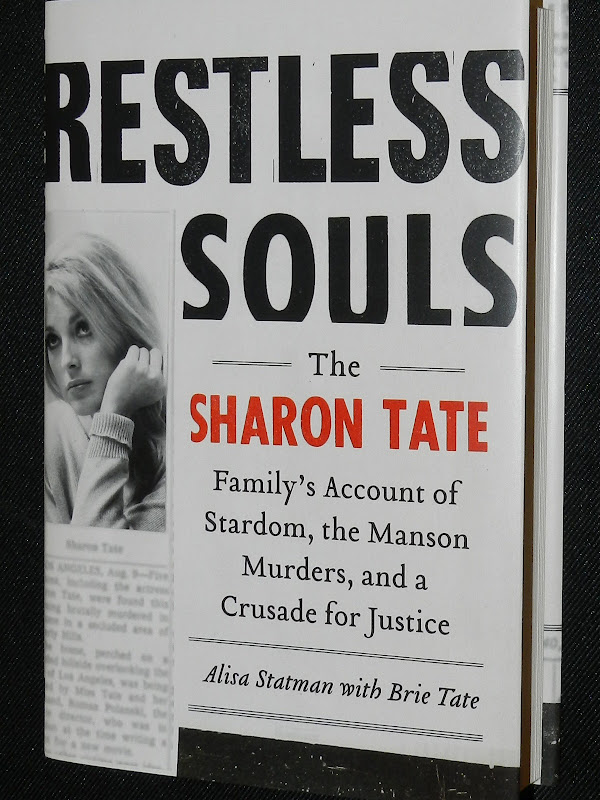 IF YOU HAVE EVEN CASUAL INTEREST IN THE SO-CALLED MANSON (OR TATE-LaBIANCA) MURDERS OF AUGUST 1969 HERE IN LOS ANGELES – AND IF YOU’VE READ HELTER SKELTER, THE FAMOUS BOOK BY L.A. DISTRICT-ATTORNEY VINCENT BUGLIOSI, PROSECUTOR OF THE KILLERS – THIS NEW BOOK WILL FASCINATE. RESTLESS SOULS IS A HEART-WRENCHING STORY TOLD BY THE FAMILY OF ACTRESS SHARON TATE, WHO WAS SLAUGHTERED ALONG WITH FOUR OTHERS IN BENEDICT CANYON (ABOVE BEVERLY HILLS) ON AUG. 9, 1969. THE MURDERERS (CHARLES “TEX” WATSON, SUSAN ATKINS AND PATRICIA KRENWINKEL) WERE MEMBERS OF THE CULT “FAMILY” LED BY CHARLES MANSON AND ALL (INCLUDING MANSON) WERE SENTENCED TO DIE. BUT, WHEN THE STATE OF CALIFORNIA BRIEFLY ABOLISHED THE DEATH PENALTY IN 1972, THEIR SENTENCES WERE COMMUTED TO LIFE IN PRISON WITH ELIGIBILITY FOR PAROLE. THIS BOOK DETAILS THE DOGGED FIGHT – SPARKED BY SHARON TATE’S MOTHER, DORIS – TO KEEP THE KILLERS BEHIND BARS. ATKINS DIED OF BRAIN CANCER THREE YEARS AGO BUT WATSON AND KRENWINKEL ARE STILL GRANTED PAROLE HEARINGS. DORIS TATE ALSO SUCCUMBED TO CANCER AND HER CRUSADE CONTINUED THROUGH DAUGHTER PATTI (SHARON’S SISTER, WHO DIED OF BREAST CANCER IN JUNE 2000) AND PATTI’S DAUGHTER, BRIE. THEIR REFLECTIONS ABOUT THE MURDERS; THE OFT-BIZARRE COURT TRIALS OF 1970-71, AND THE HELLISH PAROLE HEARINGS INVOLVING WATSON, ATKINS AND KRENKINKEL ARE CHRONICLED IN THIS SPELLBINDING JOURNAL.

THE 1972 HIT SINGLE BY ALBERT HAMMOND – IT NEVER RAINS IN SOUTHERN CALIFORNIA – WAS AN APT DESCRIPTION OF THE WEATHER IN LOS ANGELES DURING THE MONTHS OF JULY AND AUGUST. THOUGH COOLER DAYS OCCASIONALLY BEGIN WITH A MARINE CLOUD-LAYER THAT ROLLS IN FROM THE PACIFIC OCEAN, IT BURNS OFF BY NOON-TIME AND GIVES WAY TO GLORIOUS SUNSHINE. EVERY SO OFTEN, A WARM AIR-MASS FROM THE GULF OF MEXICO MOVES INTO SOUTHERN CALIFORNIA, LEADING – PERHAPS ONCE A YEAR – TO A FEW DROPS OF RAIN (AS FELL HERE ON WEDNESDAY AFTERNOON). THE PAY-OFF IS AN ABSOLUTELY BREATHTAKING SKY, AS THE SUN SETS BENEATH THE HORIZON, CASTING ITS ORANGE GLOW ON THE LINGERING CLOUDS: 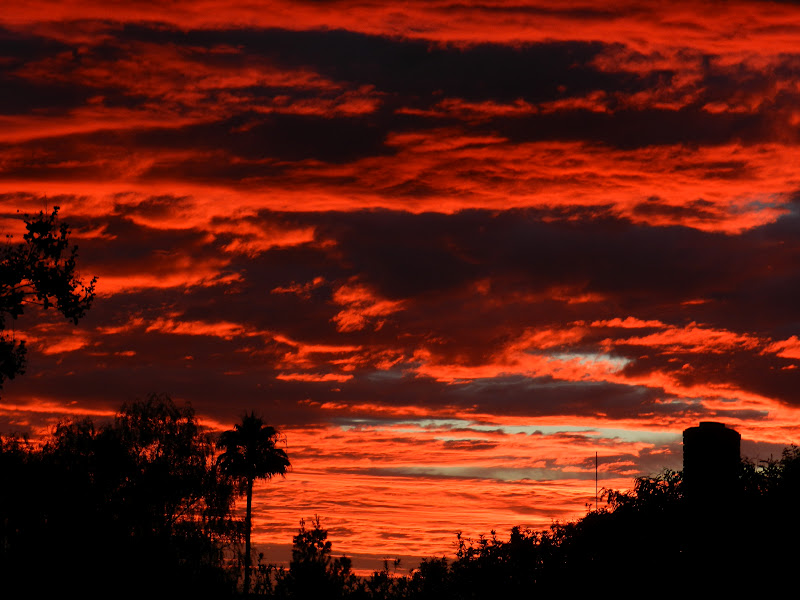 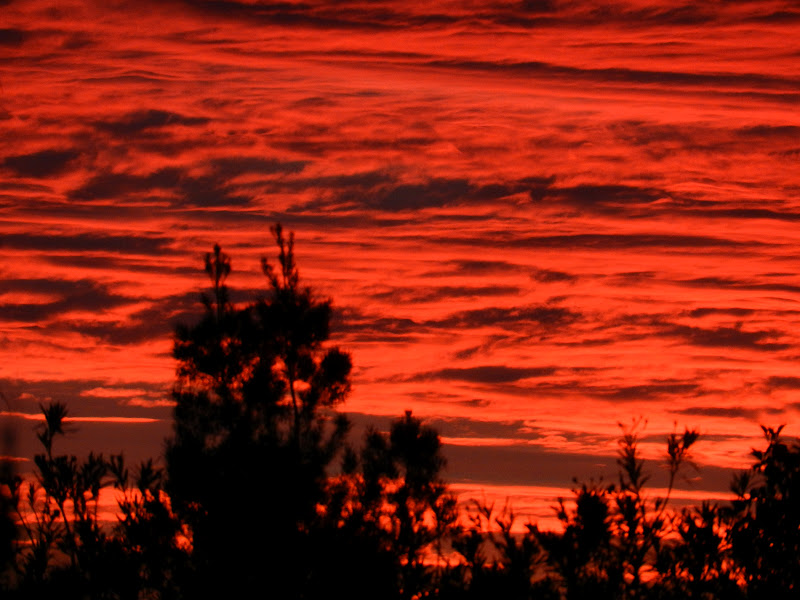 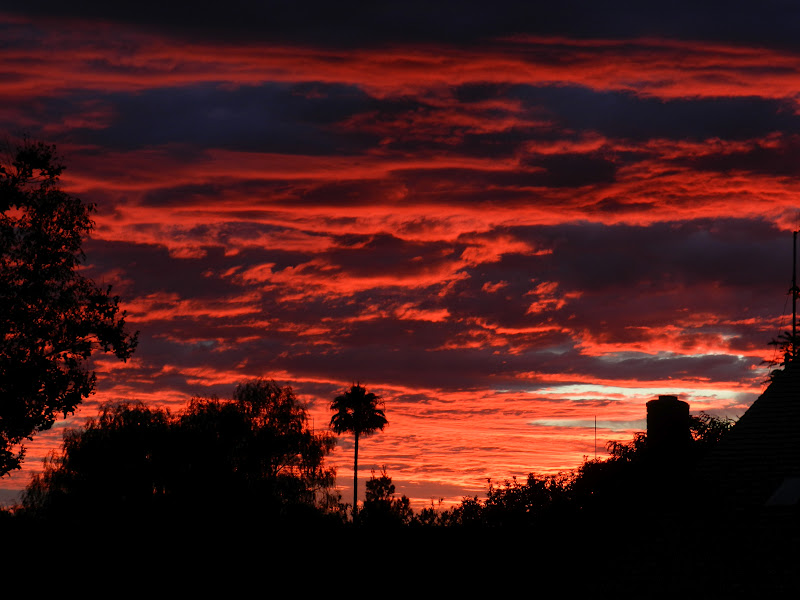 LOOKING IN THE OPPOSITE DIRECTION (BELOW). 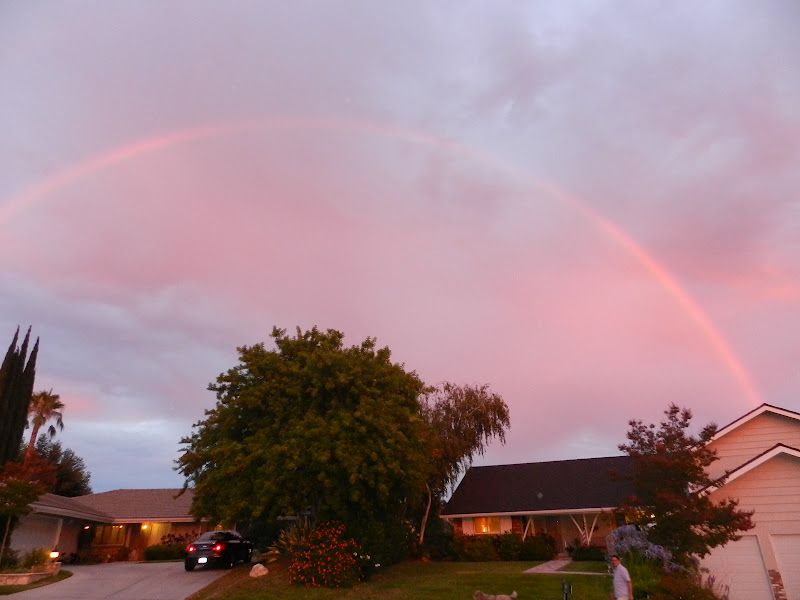