TORONTO (July 4) – I just received a copy of a book that might easily become the most compelling and meaningful volume related to hockey since Ken Dryden released The Game in 1979. Published and written by Jason Farris, an entrepreneur in West Vancouver, B.C., Behind the Moves: NHL General Managers Tell How Winners Are Built appears to be the bible of inside information as told by those that have fashioned Stanley Cup-caliber teams. Interestingly, the foreword is written by Brian Burke, who entered such company as GM of the Anaheim Ducks in 2007.

In late-January, 2010, I flew from Fort Lauderdale to Toronto on the same Air Canada flight as Burke and his wife, Jennifer. Among the principal subjects in Leaf-land was Tomas Kaberle, who gravely required a change of address, yet still appeared to have marketability around the league. As we stood at one end of the luggage carousel in Pearson Airport, Burke emphatically repeated to me his righteous claim that he wouldn’t ask one of his players to waive a no-movement clause; in this case, the fading Leafs defenseman. Such examples of morality have been a Burke staple in Toronto – increasingly to the detriment of the Blue and White.

In Behind the Moves, however, the Leafs GM makes the following statement: “There’s a ruthless side to running a team. You’ve got to be able to trade a guy who has a pregnant wife, or whose dad has cancer, because you still have to do what’s right for the team. And most guys, to their credit, don’t have that. You’ve got to be a prick sometimes to do this job.”

Am I the only one that senses contradiction in a GM/prick that will trade a guy “whose father has cancer” but will not “ask a player to waive his no-movement clause”? 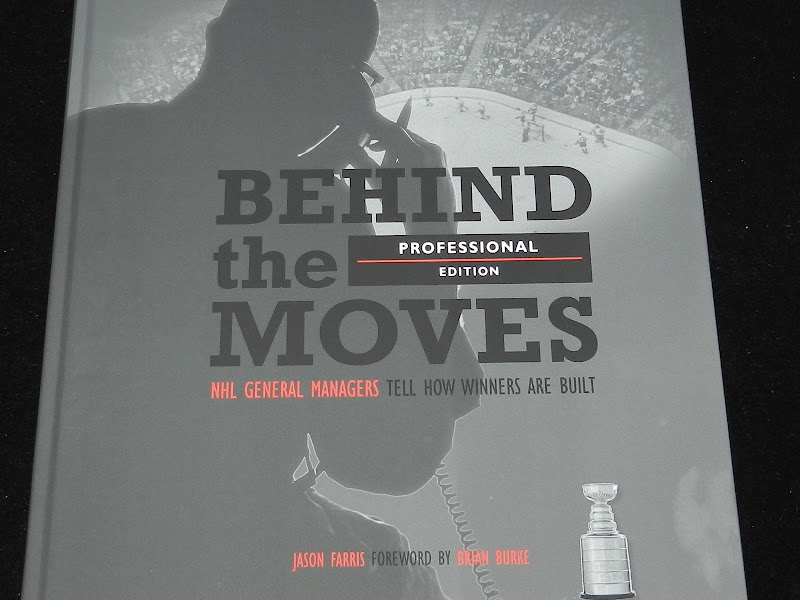 THIS COULD BE THE MOST SIGNIFICANT HOCKEY BOOK IN DECADES.

Further to Burke’s declaration, long-time Detroit Red Wings executive and former manager Jim Devellano tells Jason Farris: “This is a dog-eat-dog world, the NHL. Over 170 general managers in the history of the league; so many thousands of people out there who would like to be a general manager in the league… if you don’t perform, the game will eat you up and spit you out.”

Ken Holland, Detroit’s current GM and one of hockey’s brightest, most-prolific managers, had this to say about ex-Philadelphia colleague Bobby Clarke: “He had no problem challenging anybody at the front [of the room at GM meetings; the commissioner; the NHL’s director of [operations]; the supervisors; the officials. He knows what he wants. He knows what he believes and he’s feisty. He’s a competitor. [For him, it was] Flyers first, without a doubt.”

Wasn’t this, not long ago, a description of Brian Burke?

Whatever became of the daring, creative, get-out-of-my-way bulldog that left behind a Stanley Cup finalist in Vancouver and later closed the deal in Anaheim by acquiring Scott Niedermayer and Chris Pronger in consecutive summers? Heck, what became of the lovable blowhard that told Leaf fans he was going to build a playoff team in less than five years; that intended to trade up and snag John Tavares first overall in the 2009 NHL draft and that somehow – we may never know the true magic – unloaded the anvil-contracts of Jason Blake and Vesa Toskala on the same day, just hours after abducting Dion Phaneuf from the Calgary Flames?

What we’re left with today is a shell of the one-time daredevil; a combination good Samaritan/frightened rabbit that will throw his weight around at reporters and TV types while upholding the virtue and moral-goodness of the NHL establishment. Instead of fighting like an alley-cat to free the Maple Leafs from unending oblivion – which is presumably his mandate – Burke testifies for the league in the Ilya Kovalchuk/New Jersey Devils dispute and boldly refuses to engage in negotiation that “contravenes the salary cap” so as not to take on a mega-year deal.

Meantime, he fronts a hockey club that – were it not located in the sport’s most forgiving market – would have slid beneath relevance on his watch; the only team in the post-lockout NHL not to see playoff action and shamed by the longest current Stanley Cup drought. It’s a franchise rolling in cash that choice players routinely bypass in free agency and either disregard altogether or submit to a “courtesy” call when factoring no-movement privileges. It’s a team without any form of credible leadership – as evidenced by the disgraceful collapse in the waning months of 2011-12.

And the true pity of it all is that the man in charge is capable of so much more. We’ve seen it – with our own eyes. Just not in this city.

It’s as if Burke has finally chosen to avail himself of the accountability deficit among those that pay the freight in Toronto. Peruse the Internet today and you’ll be regaled with Leaf zealots sighing in relief; practically celebrating that Burke will not “constrict the franchise” with lengthy deals; absolutely thrilled with the treasury of “can’t miss” prospects in the organization; euphoric that the GM hasn’t “gambled” with the club’s marvelous legacy of missing the playoffs for nearly a decade.

It just keeps going – on and on; year after year – in this, the “easiest” hockey market on Earth, where indulgence and complacency flourish.

When, if ever, will the cycle end?

And, who will be responsible for it?