TORONTO (Sep. 5) – Though coverage of the now-dormant negotiation between the National Hockey League and its players has been typically thorough, I’m astonished at the number of well-connected people that consider Sep. 15 a “deadline”. No person in the media has followed events as closely and accurately as Chris Johnston of Canadian Press. Yet even Chris Tweeted earlier today: “As of 9 a.m. ET this morning, NHL and NHLPA have no plans to resume talks. CBA is set to expire in 10 days.”

We all know where Johnston was coming from in his 140-character message, so this is not intended as criticism. But, Sep. 15 has never been a pressure-point – or deadline – of any consequence in this squabble. For all intents and purposes, the players are already locked out by the owners; it merely becomes “official” ten days from now when the current Collective Bargaining Agreement expires. Even if some miracle occurred and a new CBA were crafted in the interim, Sep. 15 would still be insignificant. No games are scheduled for that date. Most training camps do not open until the third week of the month. Not a penny will be forwarded to the players until the second week of October, when the regular season begins.

To be honest, I don’t think the owners have adopted any deadline. Though I hope I’m 100 percent inaccurate, I firmly believe they are willing to cancel the entire 2012-13 schedule at the drop of a hat. For sure, the longer the players are willing to hold out in their futile attempt to “win”, the better chance there is of losing a full season (and playoffs) for the second time in nine years. But, it’s highly doubtful the owners look upon even the most oft-mentioned dates – U.S. Thanksgiving; New Year’s Day (and the coveted Bridgestone Winter Classic) – as a cut-off or target.

As they did in 2004-05, the owners will merely wait until the players grow tired of losing precious months from their brief careers.

True, the Kontinental Hockey League is making all kinds of noise about “welcoming” locked-out NHLers to its fold. But, do any of us truly believe that KHL teams will commit hundreds of thousands – perhaps millions – to players that demand an immediate escape clause in the event of a labor agreement in North America? Accordingly, the KHL has only one option: to convince the cream of the NHL crop – Sidney Crosby, Evgeni Malkin, Steven Stamkos, Claude Giroux, John Tavares – to forgo their futures in the world’s best league and commit long-term to Russia. Desert-sand and tumbleweed will blow across the mid-Florida swamp before that happens.

The prevailing 80 percent of NHL skaters – middling and inter-changeable – have no bearing on this process, whether they choose to stay or leave. 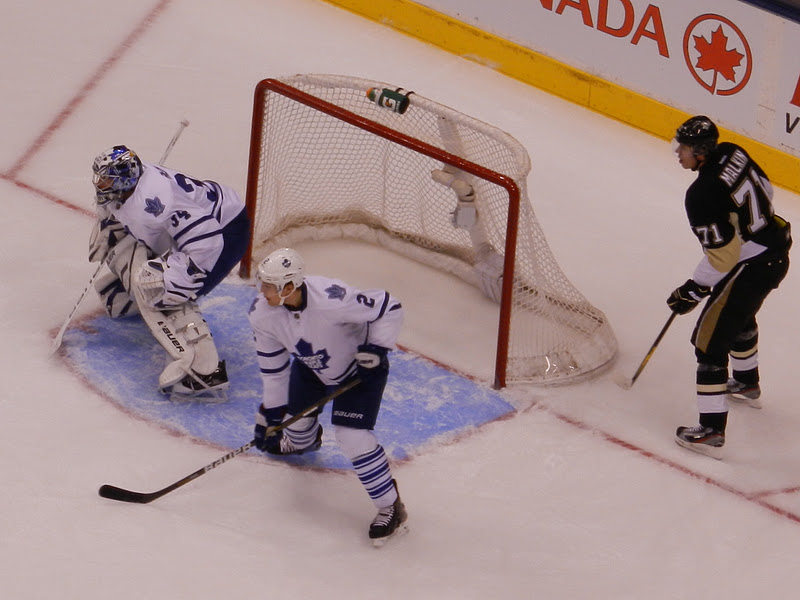 IF SUCH PLAYERS AS EVGENI MALKIN – SHOWN ABOVE IN ACTION AGAINST THE LEAFS AT AIR CANADA CENTRE ON FEB. 1 – WERE RESOLUTE ENOUGH TO COMMIT LONG-TERM TO RUSSIA, PERHAPS NHL OWNERS WOULD THINK TWICE BEFORE OBLITERATING ANOTHER SEASON. BUT, DON’T HOLD YOUR BREATH.

A lone wild-card in the labor skirmish – though highly remote – would be a catastrophic failure of ownership resolve. Most Canadian markets and several of the more traditional U.S. teams turn a profit; the club in this town makes money hand-over-fist. As such, the Toronto Maple Leafs, Montreal Canadiens, Calgary Flames, Edmonton Oilers, Vancouver Canucks, New York Rangers, Philadelphia Flyers and Pittsburgh Penguins would hope to avoid a work-stoppage. Owners of these teams will be gritting their teeth even harder than in 2004-05, when the specter of a payroll ceiling (and its colossal cash-grab) dictated tone. But, there aren’t nearly enough money makers in the current NHL to rule the day.

Even Tim Lieweke, president of the company that owns the defending Stanley Cup champion, told the Los Angeles Times, “We don’t run this team to make a profit, and the good news is, we haven’t. This is a team that, ultimately, we are passionate about because it helped build AEG [Anschutz Entertainment Group]. This is not about, ‘How much money can we make on the Kings?’ We’ve never made a penny on the Kings.”

Similar remarks could be offered by NHL front-men in Columbus, Nashville, Raleigh, N.C., Sunrise, Fla., Tampa, Dallas, Denver, St. Louis (most years), Buffalo (most years), Uniondale, N.Y., Newark, N.J., Anaheim and Glendale, Ariz. (which the league continues to operate). Even Winnipeg – a city with an enormous fan-base – has no hope of turning a profit in the current NHL. The vast majority of these clubs stand to lose less in a work-stoppage than by opening their arena doors. As such, the few “wealthy” teams have little choice but to remain part of a coalition.

In the end, therefore, a resumption of hockey lies with Donald Fehr and his constituents. If the majority of players accept they will continue to be compensated far-beyond their levels of ability – compared to the general work-force – even a full-concession to the owners’ mid-July directive is reasonable.

Otherwise, they will scramble to make alternate, less-appealing arrangements – none of which are even remotely affected by the “deadline” of Sep. 15.

DO NOT UNDER “SEL” TOM

Given the reaction to Maple Leaf Sports and Entertainment appointing Tom Anselmi its new Chief Operating Officer, continued disaster on the ice and playing field is assured. Which all-but summarizes the feeling of gloom in North America’s most-unaccomplished professional sports market.

I might suggest, however, not to consign Anselmi to inevitable failure.

The 56-year-old native of Etobicoke, Ont. has developed a superb reputation – internally and abroad – as a communicator and businessperson. Since being hired by Cliff Fletcher and Maple Leaf Gardens Ltd. in early-1997, Tom has been a trusted, moderate voice in both the Steve Stavro and Ontario Teachers’ Pension Plan administrations. If he were a United States politician, Tom would rank among the cherished-few with an ability to work both sides of the Congressional floor.

Here in championship-starved Toronto, he is merely the perfect choice to withstand rigors of the trade.

TOM ANSELMI: GIVE THE GUY A FIGHTING CHANCE.

Many observers are quick to point out Anselmi’s lack of success as proprietor of Major League Soccer’s Toronto F.C. Which is odd because I don’t remember any person crediting such board-executives as Brian Bellmore, Donald Crump, George Whyte or Robert Bertram for the successful years of the Maple Leafs under Fletcher, Pat Burns and Pat Quinn. It also pre-supposes that Anselmi was given his current role to spark an unprecedented turnaround of the company’s professional sports cache.

Sorry, friends. That culpability rests with Brian Burke and Bryan Colangelo – the established and highly-compensated managers of the Leafs and Raptors – neither of whom Anselmi brought aboard. Whether or not Tom has the authority and/or gumption to make a change at this level somewhere down the road remains to be seen. But, he most-assuredly deserves a chance to out-perform his predecessor, Richard Peddie, in that regard.

Let’s hold off just a tad before burying this well-respected man.

Interesting to note the sub-headline in today’s Toronto Star report on the Leafs by Kevin McGran: “We Want to Play, Leafs Say” adorns the inside of Page 2 in the sports section. It quotes a number of players working out informally; suggesting how badly they wish to avoid a lockout and “start playing” once again.

Sorry to be a cynic, but where was the “let’s play” “all-for-one” attitude when the team was spiraling to the depths of the NHL late last season? At the most-defining juncture of the NHL schedule, this group simply cowered and folded before our eyes. Now, it cannot wait to get going once again. Perhaps this reflects the forgiving nature of the Leafs’ desolate fan-base, most of which has no acquaintance with prosperity.

Otherwise, such words are vehemently hollow.