TORONTO (Jan. 20) – It is difficult to fathom that the Maple Leafs are hotter right now than the Anaheim Ducks. But, it’s true. Over the past 72 hours, Leafs have out-pointed the National Hockey League’s best team, 2-0. And, if you think that’s ridiculous, have a gander at Leaf results since early December:

This team is more up and down than Ron Jeremy in his prime.

Size matters, however, in the Eastern Conference where Leafs have again moved into the first wild-card playoff spot – three points clear of the surging Columbus Blue Jackets. Sustenance is critical, as five Eastern opponents (Columbus, Detroit, Ottawa, Washington and New Jersey) are within four points of the Blue and White. Toronto’s season-high four-game win streak has been accomplished as you might expect: With the club’s best players (Phil Kessel, Joffrey Lupul, Tyler Bozak, James van Riemsdyk, Nazem Kadri) excelling; with Jonathan Bernier looking more and more comfortable as the undisputed No. 1 goalie the Maple Leafs must have and with Randy Carlyle battling every strand of DNA to keep skilled youngsters Jake Gardiner and Morgan Rielly in the line-up (one can only imagine the sleep Carlyle is losing over that). CARL GUNNARSSON AND THE LEAFS WERE FLYING HIGH SATURDAY NIGHT IN A 5-3 WIN OVER MONTREAL AT AIR CANADA CENTRE. CLAUS ANDERSON GETTY IMAGES/NHL.COM

Just more than a week after the Globe and Mail proclaimed “MAPLE LEAFS IN MIDST OF ANOTHER DISASTROUS COLLAPSE” – evoking the now-eternal Brian Burke analogy of an 18-wheeler tumbling over the cliff – the planets seem properly aligned. Which shows you how hastily the scene can shift in the NHL. Late this afternoon, in Glendale AZ against the Phoenix Coyotes, Leafs begin a 10-game-in-20-night scamper toward the Olympic break which – given the December-to-January pattern – is more than enough time for the club to offer us Jekyll… Hyde… and Jekyll. At some point, it is possible the Leafs will establish an identity by, a) putting it all together and threatening Boston and Tampa Bay atop the Atlantic Division, or b) crowding aboard the 18-wheeler and heading for the abyss. More than likely, however, the second half of the season will provide Leafs Nation the torturous inconsistency that threatens a playoff berth; such a position to be undecided until the final week of the schedule. That just seems to be the way around here, though I suspect – for Leaf fans – it is more agreeable than the archetype of the past decade in full NHL seasons: Bowing out early and providing false hope in “garbage time.”

DON’T DO IT, DAVID: Rampant trade speculation involving Nazem Kadri has Carlyle’s imprint all over it. And, this is where Maple Leafs general manager David Nonis has to take full command. As written here (1ab0WrG) in a blog on Jan. 6, I don’t believe a Carlyle-Kadri marriage can prevail. In my view, one or the other will survive as a Maple Leaf beyond the current season and I maintain that Carlyle will not be able to weather a playoff absence this spring. It therefore makes little sense for Nonis to be entertaining trade proposals involving Kadri until at least the Mar. 5 NHL deadline, if at all. Though Leafs need Kadri to perform better on a game-by-game basis, as he did so wonderfully in the lockout season a year ago, he is too young and too skilled to give up on – no matter how much he aggravates Carlyle. My pal James Mirtle posted a cautionary tale in the Globe and Mail this week, warning Maple Leafs to avoid another Alex Steen scenario, whereby a struggling though gifted youngster is abandoned prematurely. I couldn’t agree more.

POKER-FACE McKENNY: On the heels of my Saturday blog, which lauded Phil Kessel for his mannerly way of celebrating a goal, I was reminded of an acute example involving another Maple Leafs player. My good pal, Joel Colomby – assistant sports editor of the Toronto Sun – remembered how Jim McKenny practically froze after scoring a remarkable goal at Maple Leaf Gardens during the 1971 Stanley Cup quarterfinals against New York Rangers. Facing elimination in Game 6 on Apr. 15, Leafs were trailing, 1-0, in the dying moments when McKenny gobbled up the puck in his own zone; took it the length of the ice and beat New York goalie Ed Giacomin with a wrist-shot from the right-wing circle at 17:26 of the third period. The Gardens absolutely exploded and Joel and I both recall – all these years later – how nonchalantly McKenny reacted.

The game has been shown several times on LEAFS-TV:

McKENNY CIRCLES WITH THE PUCK IN HIS OWN ZONE AND SKATES UP THE MIDDLE OF THE GARDENS ICE WITH TEAMMATE DAVE KEON BESIDE HIM. HE CROSSES THE RANGERS BLUE-LINE WITH FORMER LEAFS TEAMMATE TIM HORTON (3) DEFENDING…

KEON RAISES HIS STICK AND THE GARDENS ERUPTS AS McKENNY’S SHOT ELUDES GIACOMIN TO TIE THE GAME, 1-1, AT 17:26 OF THE THIRD PERIOD…

VIRTUALLY EXPRESSIONLESS, McKENNY IS GREETED BY TEAMMATES RICK LEY (2) AND BRIAN GLENNIE (24) BEFORE HEADING TO THE MAPLE LEAFS BENCH.

When interviewed by Joe Bowen on LEAFS-TV about his unemotional display, McKenny replied: “I was embarrassed – that was my first feeling. When the [Gardens] started going crazy like that, I thought ‘holy jeez, let me get to the bench and put a towel over my head.’ You like the adulation, but when it comes at you to that extent, it’s really uncomfortable. I didn’t feel too great.”

When I asked McKenny about his poker-face on that play a few years ago, he responded: “I was scared sh-tless.” New York won the series when former Leaf Bob Nevin beat Jacques Plante with a shot from near the blue-line at 9:07 of the first overtime period. 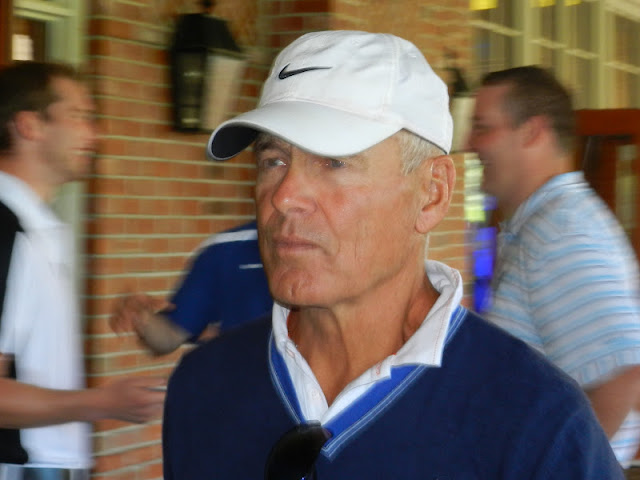 LOOK OUT TROY… LOOK OUT PHIL… LOOK OUT JOHN: Though it’s impossible to have anything but total respect for the lead NFL analysts on FOX, CBS AND NBC, I’d be looking over my shoulder at Peyton Manning – a word to the wise, perhaps, for Troy Aikman, Phil Simms and John Gruden. All three are terrific at what they do, but Manning is so well-spoken and personable, he’ll be the hottest thing out there if he decides on a broadcasting career after football.

Speaking of quotes, there will be no shortage of good cheer among the coaches at Super Bowl 48 in New York. Pete Carroll (Seattle) and John Fox (Denver) are the most enthusiastic of their ilk in football. For those who remember the NFL of the 80’s and 90’s, it is rather odd to see Denver and Seattle in the Super Bowl given they were rivals in the AFC West for so many years with Oakland and Kansas City. Broncos and Seahawks would play twice per season – home and away.

SHORT AND SWEET: Amid the endless talk about Saturday night’s line-brawl off the opening face-off between Vancouver Canucks and Calgary Flames, I have only one reaction: It was probably the stupidest thing I’ve ever seen while watching hockey at any level. Though the NHL refuses to ban fighting, I can’t imagine Gary Bettman, Bill Daly and Co. being anything but embarrassed over the absurd spectacle.