TORONTO (Dec. 23) — How unusual it was, still, to see the once–proud Colorado Avalanche looking so downtrodden and hopeless against the Maple Leafs on Thursday night. A 6–0 loss at the Pepsi Center flattered the home team while cementing its place at the bottom of the National Hockey League standings.

What has become of the former Quebec Nordiques franchise that took Denver by storm upon re–location in 1995 — immediately winning the Stanley Cup, and then repeating five years later? The team of Patrick Roy, Joe Sakic, Peter Forsberg, Rob Blake and Raymond Bourque; all members of the Hockey Hall of Fame? Moreover, how has it gotten so horrible in the Mile High City? Didn’t the Avalanche follow the boilerplate strategy of the salary cap era by bottoming out for half–a–decade; missing the playoffs in six of the past seven years and stockpiling coveted picks near the top of the NHL draft? Isn’t that the so–called “Shanaplan” here in Toronto? The blueprint of the struggling Edmonton Oilers? And, hasn’t it worked marvelously for the Chicago Blackhawks of Patrick Kane and Jonathan Toews — three–time Stanley Cup champion since 2010?

It is said today that if a team can put together a solid nucleus of half–a–dozen players, including an elite defenseman and dependable goaltender, it should be able to thrive in the NHL. Well, hasn’t Colorado effectively done that since 2009 — drafting Matt Duchene, Tyson Barrie, Nathan MacKinnon and Gabriel Landeskog? Should that foursome take a back–seat to Morgan Rielly, William Nylander, Mitch Marner and Auston Matthews? If so, then surely not by many lengths. Why, then, are the Leafs considered a young, burgeoning team while the Avs are — in the words of MacKinnon  — “embarrassing” themselves nightly?

WHAT HAS BECOME OF THE COLORADO AVALANCHE, ONCE A PERENNIAL STANLEY CUP CONTENDER?

It’s a question without an easy answer.

Particularly after it appeared, merely three seasons ago, that Colorado had become a Stanley Cup threat once again — finishing second to Boston in the 2013–14 NHL standings with a 52–22–8 record for 112 points. Semyon Varlamov may not be another Roy between the pipes (who is?), but neither is he a sieve. Varlamov has ranked in the “dependable” category through much of his nine–year NHL term with Washington and Colorado. In 2013–14, he compiled a record of 41–14–6 and a 2.41 goals–against average. Middling netminders don’t often accomplish that. Has he suddenly forgotten how to play the position?

Clearly, there’s been turmoil off the ice with the Avalanche since that season. Roy — next to John Elway, arguably the most–revered athlete in Denver sports history — coached the team and pioneered the now–common practice of removing a goalie for a sixth attacker with more than 90 seconds to play in a one–goal game. Roy suddenly resigned as coach and V–P of hockey operations last August, apparently catching his boss (and former Cup teammate) Sakic off guard. The Avs replaced Roy behind the bench with Jared Bednar, coach of the defending American Hockey League–champion Lake Erie Monsters. Poor Bednar looked like he was battling PTSD (post–traumatic stress disorder) every time the TV camera focused on him Thursday night.

The Mile High disaster was a subject of the TSN intermission panel during the Leafs rout of the Avalanche. Jeff O’Neill, who scored 237 goals as a winger in the NHL from 1995 to 2007, had difficulty putting his finger on it. “That team is absolutely terrible and it shouldn’t be,” said O’Neill, flanked by James Duthie, Darren Dreger and Dave Poulin. “There must be a problem in the dressing room. It’s the only way I can figure it.”

Whatever the issue, something is rotten in Denmark… or, in this case, Denver.

IT WAS NO CONTEST AT THE PEPSI CENTER THURSDAY, AS TORONTO DEMOLISHED COLORADO, 6–0.

The Avalanche has joined the Oilers as a cautionary tale for fans of the Maple Leafs. Though it appears Brendan Shanahan, Lou Lamoriello and Mike Babcock have the Blue and White pointed northward, there are no guarantees in the NHL. Even when a club seems to be constructing itself properly and traditionally.

Only time will tell whether this is a downward blip for the ailing Colorado franchise… and whether the Maple Leafs will ascend from their decade–long quagmire by following virtually the same path.

For no reason other than some benign nostalgia, I posted this old newspaper wrestling ad from 1971 on my Facebook page… and it went freakin’ viral. Practically every Baby Boomer “friend” of mine commented on the names in the ad, remembering Frank Tunney’s Sunday–night wrestling shows at Maple Leaf Gardens.

The wrestling heyday of my youth occurred between 1969 and 1972 when a used–car salesman from Detroit named Eddie Farhat — billed as The Sheik — could not be conquered by even the greatest of opposition. A stroke of genius by the promoter Tunney and his son, Jack, kept The Sheik as a headliner at the Gardens for more than three years, and drew crowds in excess of 14,000 to most Sunday–night cards (not infrequently selling out the home of the Toronto Maple Leafs). Accompanied by his manager, Abdullah Farouk (aka The Weasel; real name Ernie Roth), The Sheik was our city’s most notorious villain in the early–70’s.

For the apparent multitudes that vividly (and fondly) recall that era, here’s a rundown on the characters of the wrestling ring — the overwhelming majority of whom have since passed on: 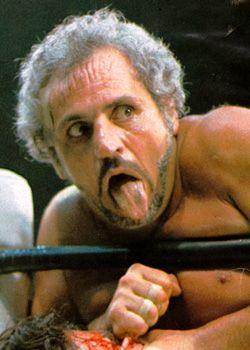