TORONTO (Nov. 16) — If you’re an observer of media here in Canada, I ask this question, sincerely and unequivocally: Had someone told you on June 13 of this year — the night the Raptors won the National Basketball Association title in Oakland — that within five months, Bob McCown, Don Cherry, Nick Kypreos, Doug MacLean and John Shannon would all be terminated by Sportsnet, how might you have reacted?

Think about it for a moment. The company (Rogers) that coughed up a prodigious $5.2 billion dollars in late–2013 to acquire more than a decade of exclusive, coast–to–coast coverage of the National Hockey League dismissed, in the span of 145 days (less than 21 weeks), five of its most–recognizable figures. Two of which — McCown and Cherry — had no peer in our country… and possibly in North America. This would be every–bit the parallel to TSN expelling Bob McKenzie, James Duthie, Jeff O’Neill, Dave Poulin and Craig Button. In other words, its entire staff of hockey authorities save for Darren Dreger, the counterpart to Elliotte Friedman, who remains employed by Sportsnet. In the modern history of all media — television, radio and print — is there anything that even remotely compares to such an abrupt massacre of personnel? Can you imagine FOX Sports, the network of Super Bowl LIV (Feb. 2, 2020 in Miami), getting rid of Joe Buck, Troy Aikman (its high–profile equivalents to McCown and Cherry), Howie Long, Terry Bradshaw and Michael Strahan? Or, NBC, televising a National Football League game every Sunday night, deciding it can do without Al Michaels and Chris Collinsworth? Because they make too much money? Like I said, it’s unfathomable.

Nothing of the sort has ever happened… particularly in less than half a calendar year.

Hindsight is a wonderful ally, but these were the galvanic words from Rogers executives on Nov. 26, 2013, the day of the NHL deal. CEO Nadir Mohamed: “It’s a game–breaker. Sports content is a pillar for Rogers and NHL hockey is the Holy Grail.” President Scott Moore: “One of the pillars of our brand is innovation. You want to be careful that innovation doesn’t become change for change’s sake. The viewers really feel they legitimately have an ownership stake in Hockey Night. You can literally change too much. One of the things about Saturday night hockey is it’s comfort food. It’s something Canadians are really familiar with, and the tradition goes back 63, 64 years.” Rogers Media President Keith Pelley: “Our vision is to build on the NHL’s legacy in Canada with an emphasis on storytelling, innovation, and technology—weaving the NHL, its teams and its stars even deeper into the fabric of Canadian culture.” Heady stuff, wouldn’t you say? In fact, this is how a media submission from Nadir Mohamed should have read: “This deal will buy our way to No. 1 in the national sports market, artificially lifting us past TSN. It will also, however, choke off our resources and lead to massive cuts, firings and layoffs. Within five years, virtually all of the people intrinsic to hockey on our network — both TV and radio — will be let go. Storytelling will no longer matter. In the interim, we’ve hired a fine, young reporter named Shawn McKenzie in the hope we can lure his father, Bob, away from Bell Media to be our lead hockey expert. We’re certain this deal will fracture the element of loyalty at TSN. Once its audience begins to decline, we expect James Duthie to follow Bob. Though we said we didn’t want to go too far with innovation, we’ve decided to re–invent the wheel. George Stromboulopoulos is our new intermission host and we have a new Hockey Night In Canada set. Our commentators will carry hockey sticks while talking to the national audience. But, please don’t accustom yourself to any of our current NHL experts (or, the set). They’ll be fired within due time… and, generally, without cause. Also, please do not get used to hearing from myself, Keith Pelley or Scott Moore. We’re wildly optimistic about this landmark deal today. But, once the bullets start to fly, you won’t be able to find us with a GPS. Keith, I’m told, has already purchased a new home in Britain. And, now… on to our ‘game–breaker.'”

Some prodigious research on my part unearthed the following Rogers/NHL moments: 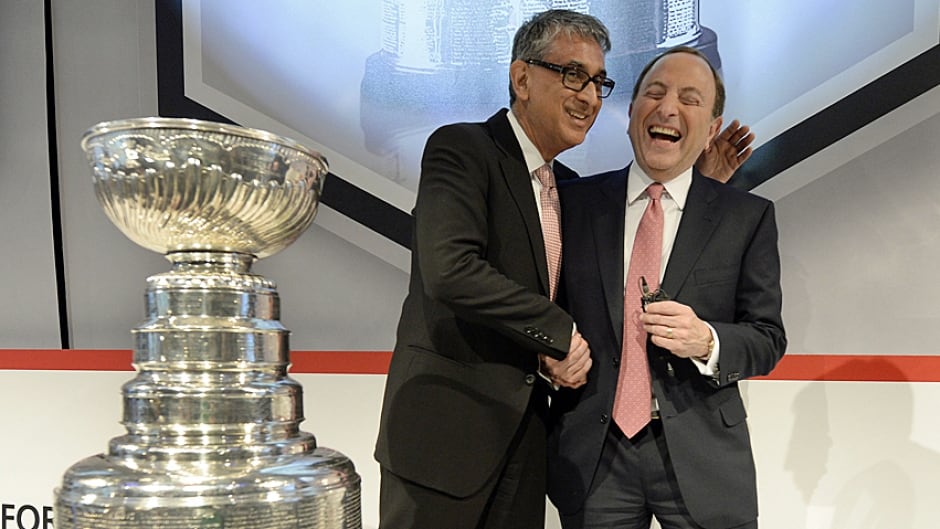 “Good God, Nadir, did we fleece you today. I’ll be belly–laughing to the bank for more than a decade.” “Look, Nadir, I know you’re leaving and I’ll try to cover for you. But, damn, there’s only so much I can say. Your company has entered into financial suicide. I’ll do my best for the others. Promise.” Gary Bettman: “Yes, I’m practically falling off my chair after coercing Rogers into this absurd deal. Don’t mind the queer smile from Nadir. I just told him about the firings and layoffs that will need to happen within five years. By late–2019, viewers will barely recognize names and faces.” Nadir Mohamed: “Yes, we really did this today. Even I’m beginning to have difficulty believing it. As you can see from Keith’s expression (far–right), the magnitude is starting to take hold with him, too.” “Holy sh**, Don, I don’t like this. Once the bodies start to fly, you’d better behave. I’m serious.” 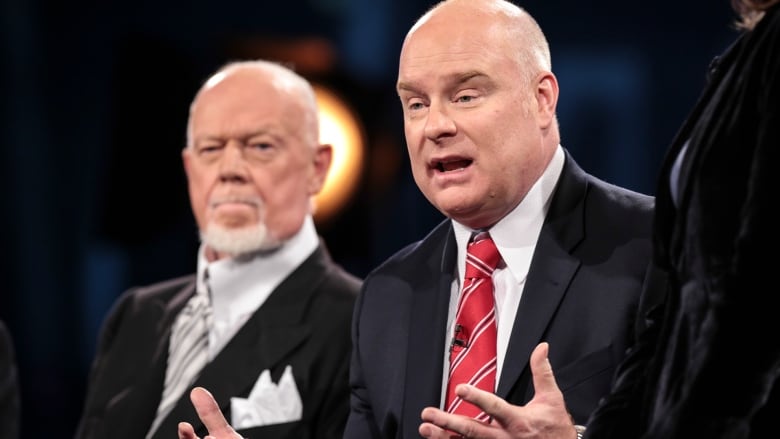 Scott Moore: “I just had a long talk with Don about Remembrance Day. Look, you people that come here and enjoy our milk and honey, the least you can do is spend a couple of bucks on a poppy. I can say this because I’m an executive. And, in Canada, executives have freedom of speech.” “I love you, Strombo, but don’t get comfortable. The guys at the top here think they invented hockey. Your best effort won’t be enough. I give it two years before you flee to California on your motorcycle. Sorry for the ‘Richard Nixon’ smile. But, I’ll be back.” “I’ve tried to stop laughing. I swear. But, the Rogers deal put me in the Hall of Fame.”

On a more somber note. And, to close… I love you, Don. Love you, Ron. I truly hope you can resume your wonderful friendship. It was always an honor trekkin’ with you guys on the road way back when. To the Bobcat, Kipper, Shanny, Doug Mac, Romy, Heals, Strombo. My colleagues. My friends. You gave it your all. And, you were fabulous. Hang in there. Good things do happen to good people. Look at Mallard down in Vegas. Or, even at the grunt writing this blog. As the saying goes, tough times don’t last. Tough people do.

6 comments on “Going Behind The Scenes at Rogers”